Punta Gorda Garden Club History Books are located at the Charlotte County History Society. A newly hired archivist is working on getting the books online for all to see.

Scroll to the bottom to see some photos and enjoy a newspaper article written by former member Elise Haymans in 1975. – Carolyn Honour former Webmaster

In celebration of Charlotte Counties Centennial in 2021 member Mary Yeomans provided the following history on the Punta Gorda Garden Club.

Punta Gorda Garden Club
For over seventy of the 100 years that Charlotte County has existed, the Punta Gorda Garden Club (PGGC) has been active in the Charlotte County community. The club was organized in 1949 and became a part of the Florida Federation of Garden Clubs in 1950. Meetings were held in members’ homes and included a guest speaker at each meeting. Activities in the beginning included decorating a city Christmas tree, providing prizes for the best decorated homes during the holidays, and planting a memorial tree for Arbor Day. Also, a campaign to keep Punta Gorda clean – Don’t Be a Litter Bug – was publicized.

The red hibiscus was chosen as the club flower as a salute to the city’s history. In 1926 the city council passed an ordinance proclaiming Punta Gorda as “The City of Hibiscus,” and 2,200 red hibiscus were ordered and planted throughout the city.

Much of the work of the club is based on accomplishment of its objectives which appear on the club website: www.pggc.org. The goals of the club are to promote the beautification and improvement of Punta Gorda and the surrounding areas, to encourage the growing of flowers, plants, and shrubbery in public and private places, and to cooperate in the conservation of natural resources, and promote education in all these areas.

Beautification of the community is accomplished in several ways. Various public gardens have been designed and planted by club members, including the Quiet Garden at the Woman’s Club on Sullivan Street, the Heritage Garden at the History Park, and the Elise Haymans Butterfly Garden at the Charlotte Harbor Environmental Center. Members of the club have worked weekly for years on garden maintenance at these, and other public gardens located in the community such as the old Punta Gorda Library, Laishley Park, and more recently, the Peace River Botanical and Sculpture Gardens. Plants have been installed at all these gardens along with the Blanchard House Museum and many Habitat for Humanity homes. The club’s most recent effort is a partnership with TEAM Punta Gorda in the America in Bloom project in downtown Punta Gorda in which consultants advise on ways to beautify the city. Planters have been and will continue to be installed and maintained.

Club members participate in community cleanup efforts each year such as the International Coastal Clean Up and the Great American Backyard Clean Up. These are organized by the Keep Charlotte Beautiful organization, which is part of Keep America Beautiful. These efforts harken back to the first cleanup campaign – Don’t Be a Litter Bug!

Flower shows have been held over the years with the first taking place in 1951 at the Woman’s Club on Sullivan Street. In 1959 the show spanned two days – 3:30 – 10:00 pm March 5 and Friday, March 6 from 11:00 am to 9:00 pm! The suggested donation was 50 cents. Recently the Flower Shows have been held in Lenox Hall at the First United Methodist Church for one day from 1:00 until 4:00 and no donations are collected. The public is invited after the judging has concluded. Times have certainly changed!

A traditional holiday celebration in Punta Gorda is the Holly Days Home Tour, presented in early December each year. Four homes in the Punta Gorda Historic District and the First United Methodist Church are decorated for the holidays using mostly natural materials. In recent years over 1,800 tickets were sold for this event. This has grown to be the primary fundraiser for the club, which provided over $12,000 in donations to local organizations that are involved in the fields related to the club’s goals in 2020. Among these are the Peace River Botanical Gardens, the Peace River Wildlife Center, ECHO Farm, Keep Charlotte Beautiful, and Avon Park Correctional Institute Garden Therapy Program. In this unique program, inmates are trained in horticultural methods and prepare for a career to be followed upon their release from incarceration.

Also, scholarships are awarded to selected college bound students from Charlotte County who will be studying in the fields of environmental science, horticulture, landscape design, and other related subjects related to the goals of the club. In 2020, $18,000 was awarded to six (6) aspiring students.

A National Garden Club Blue Star Marker was dedicated in 1968 and is still located in the median on Route 41 at the split near Carmalita Street. This plaque was refurbished by the club in 2016 and replaced by city staff. A second Blue Star Marker was installed in 2020, located at Veterans Park across the street from the courthouse. Blue Star Markers remind us of the unselfish dedication of our Armed Service members.

PGGC is also involved with youth in environmental and gardening programs. For years volunteers taught students about the importance and planting of trees at the annual Arbor Day event held in Punta Gorda for 2nd grade Charlotte County students. Partnerships have formed throughout the years at all levels of schools. Recently club members worked with students from Charlotte High School who have tended a plot in the History Park Community Garden and others worked with Horticulture classes at the Florida Southwest Collegiate High School. Students at Sallie Jones Elementary formed a club called “Lil Diggers.” This involvement with the youth of the community continues to evolve as needs change, but PGGC attempts to fulfill the needs of educators and students in Charlotte County.

Throughout the seventy or so years the Punta Gorda Club has existed, it has infiltrated many facets of our community and made this a better place to visit and in which to reside. Here’s to another 70 years! 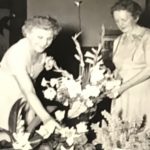 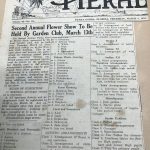 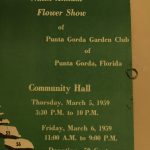 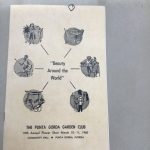 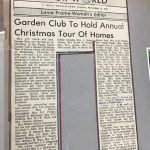 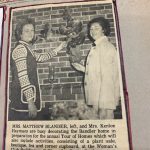 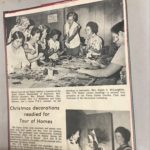 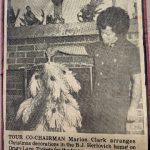 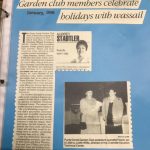 Civic pride got me involved in weeding the planter at the Punta Gorda Library last week along with several other members of the Garden Club, one of my children and Dizzy the puppy.  This did my mind good, but left me with what will probably be a permanent Charlie horse.
The job really needed to be done and it had become obvious that the county wasn’t going to fulfill their obligation to maintain their property. Kay Rice, who had arrive first, was buy at work when Marion Clark (Wester) and Marion Bandler came with their trimmers, rakes and gloves.  Branch Haymans pitched right in as did the puppy, who at eight weeks shows great promise as a digger.
Noreen Faber and Marie Borgeson earned their break for a glass of limeade which Melba Chance had wisely brought along with her, as did Jane Cerny who provided another pair of much needed hands in clearing out the weeds which had taken over to the extent that some of the oyster plants and artillery fern had been completely choked out.
Just about the time the photographer arrived a gigantic black snake made its presence known.  Everyone but Kay jumped back and screamed.  In her usual calm efficient manner she reached down, grabbed the snake and tossed it aside.  We tried to get a picture of Kay with the snake, but he had already left in a huff.
After putting in many hours we decided it was time to find out just who is responsible for maintenance of the grounds, or in this case non-maintenance.  Noreen, Jane and I went directly from the library to see the county administrator, John Printon.  Dirt, sweat, red faces, work clothes and all.
Jill Wilson, who works in Mr. Printon’s office, maintained her composure when we appeared on the scene though we didn’t exactly fit the image of garden club ladies at tea.
According to Mr. Printon it is the responsibility of the county librarian to budget funds for upkeep of the grounds for the counties three library buildings. Jo Childers, the county librarian, says that she has been forced to cut the budget for the coming year and there will be no money for this unless it is taken from the book fund since the budget is already pared to the bone.  There is a possibility that an agreement could be worked out with the city, which as a parks and grounds department, to take over the job, but the commissioners would have to provide additional funds to cover the cost, according to the county librarian.
Mrs. Childers does not feel that she should have to rely on the kindness of citizens in cutting the grass and doing the other necessary work outdoors.  Mr. Printon mentioned the possibility of establishing a department to maintain county owned property.  When questioned about this Mrs. Childers favored the proposal as did Mess. Obermayer, Punta Gorda Librarian.
When property owners do not cut their grass the county sends someone in to do the joy and charges the owners for the service.  This is done on the reasoning that tall grass and weeds are a health hazard.
Shouldn’t the same standards apply to the counties own property?  Maybe U.S. Cleveland, who has been cutting the grass at the Punta Gorda Library out of the goodness of his heart, ought to submit a bill.
Readers, let me know your opinion on the subject.  If the county commission can force mandatory garbage collection on us, maybe we can get them to cut their grass.
Commissioner Shedd told me the other day that I need more controversy in the column.  Will this do Commissioner?

Marian McAdow was an early Punta Gorda resident, who came to be a proponent of tropical landscaping and was to have a significant effect on the development of gardening in the city. Her home on Retta Esplanade was located on the site of the Trabue homestead. She managed over the years to turn the property into a tropical garden and the “banyan tree” on Retta Esplanade planted by her in 1904 still spreads its canopy over the city’s waterfront. Her influence continues to this day with an emphasis on tropical foliage and concern for trees and landscaping.

Arriving in Punta Gorda in 1897 as a young bride, Marian McAdow found a hot, sandy, barren location instead of a tropical paradise. She would travel to Europe, California, India and the Caribbean, where she collected seeds and plants to bring back to her home in Punta Gorda. She would share her experience and plants with her neighbors and became an acknowledged expert on growing plants adapted to the soil and climate of the state. This photo is taken of her home which was located on Retta Esplanade, the location of the former Best Western Hotel. 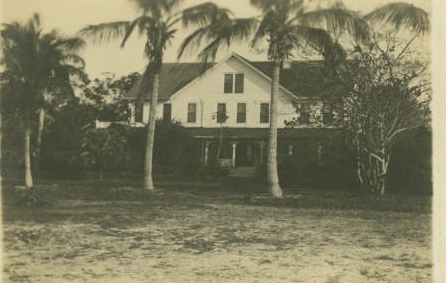 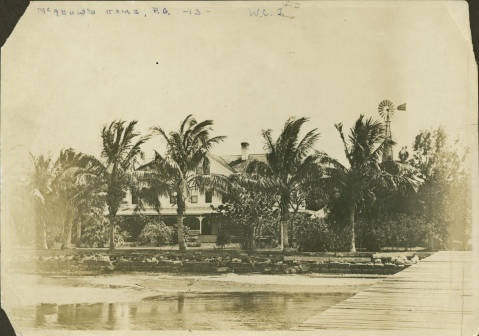 The Punta Gorda Garden Club and TEAM Punta Gorda partnered to landscape the historic Court House in downtown Punta Gorda. Jones Landscaping was the nursery that provided assistance and supplied the plants that were chosen to be in keeping with the architecture and antiquity of the building.

The Court House was built in 1928. In 1990, an extensive landscape project involving many well-known citizens, including County Clerk Barbara Scott, was organized and in 1991 the project was completed.

Hurricane Charley heavily damaged, not only the Court House, but also the existing landscape surrounding the building. The Court House was restored to its original beauty after the hurricane. Unfortunately, there were limited funds available for enhancing the grounds. The new gardens are in keeping with the Neo-Classic architecture of the building.